The Civil Wars & The Flavian Dynasty

In 68AD Vindex, the governor of Gallia Lugdunensis, revolted against the unpopular Emperor Nero. Galba, in Spain, answered his call for support and rallied with troops. However, Vindex was defeated in May by the governor of Upper Germany, Rufus. Luckily for Galba, just a few weeks later Nero committed suicide and Galba was then formally accepted as Emperor by the Senate.

Galba was also seen as an unpopular leader, due to his ruthlessness and avarice, he seized the property of Roman citizens, disbanded the German legions, and did not pay the Praetorians and the soldiers who fought against Vindex. 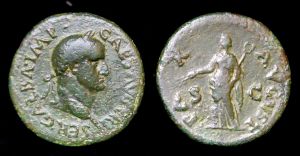 Otho, his supporter against Nero, had hoped to be named his successor but when Galba had other ideas, Otho wasted no time in organising a conspiracy against him through the Praetorian guard and had him assassinated.

He seized the throne in January 69 but the Rhine legions had already sided with Vitellius, not recognising either Galba or Otho previously, and the battle for the lead came to a head in April at the battle of Bedrianus. Otho was massively defeated and elected to commit suicide as a result. 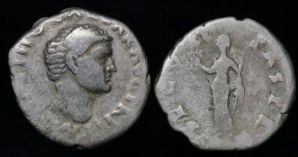 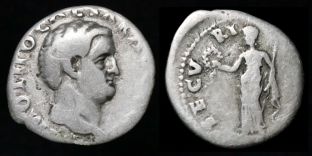 Vitellius was now undisputed ruler of the Empire and took his time returning to Rome for the title of Augustus by arriving in July, this was a fatal error. The time was used productively by the legions to name Vespasian their preferred choice. In December, the again unpopular Vitellius was arrested in his palace and dragged through the streets to be mobbed. Vespasian had been quietly gathering support and with the help of his son, Titus, both militarily and personally, he took the throne. 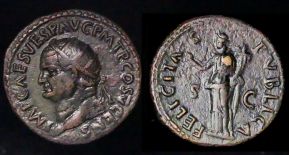 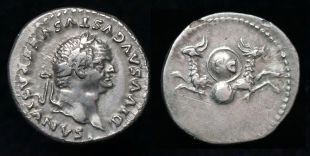 Laureate head of Vespasian / SC on a shield supporrted by two Capricorns back to back, globe below.

He, unlike his three predecessors, was a competent and well liked leader and enjoyed ten years as Emperor before this death at the age of 70. Titus was his successor.

As for the coinage of these fleeting leaders, it never ceases to amaze me that they produced such a large number of types in such a short space of time. Vespasian and Titus had the luxury of a more leisurely span of time and produced coinage jointly as well as in each other's names.

Issued in Lydia at the city of Mostene 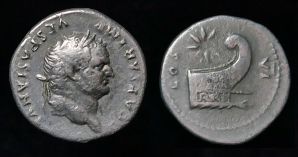 Head of Titus, right/Prow of galley right, star above. S2441 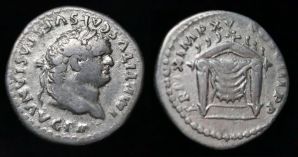 History Note: Towards the end of 79AD, Mount Vesuvius erupted destroying Pompeii and Herculaneum, there was also a plague during that year. It is thought that the last coin was one of a series giving prays after these, now considered natural, disasters!

COMING SOON: Fossils page, the perfect gift if they don't like coins!