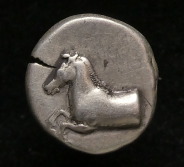 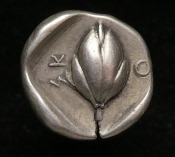 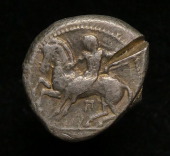 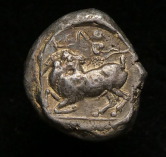 Reverse: Goat kneeling to left, KEΛE, branch with ivy leaves and berries above

Prov: from the Michael Higley Collection 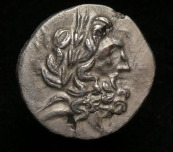 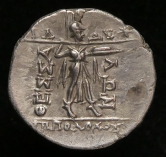 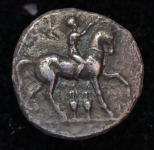 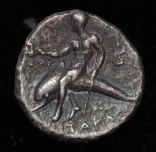 Reverse: Taras seated on dolphin, left, holding kanthros and trident, TARAS below, B to right

Obverse: Nike flying left above a swan; all in an olive wreath

Reverse: Athena standing on the left, helmeted, holding a long javelin in her right hand; in front of her, at her feet, a shield

Grade: Typically this coin is slightly off centre and rarely in good state, this is a reasonable example of a rare coin. 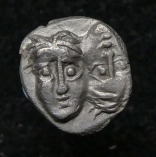 Obverse: Two male heads facing, side by side, the right inverted

Reverse: IΣTΡIH above sea-eagle, left, on dolphin, AΠ monogram below 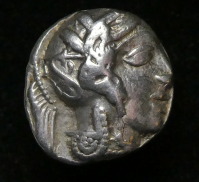 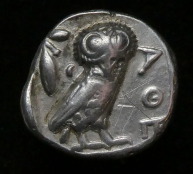 Reverse: Owl standing, right, olive sprig and crescent behind with AOE all in an incuse square. 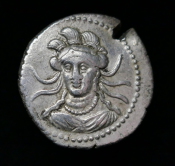 Balakros was the satrap of Cilicia under Alexander III (the Great). 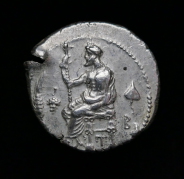 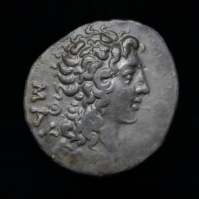 Obv: Head of Alexander the Great, right, with horn of Ammon and flowing hair, MAKEΔ[ONΩN] beneath, Θ behind 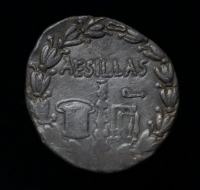 Note: A remarkable coin produced by the Romans to appeal to the Macedonians. Both Greek and Latin are displayed, and the power of Rome is also demonstrated with the tax collectors name and tools of his trade on the reverse! This coin could be equally shown on the Roman or Alexander pages! 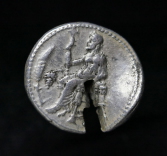 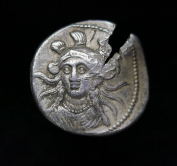