Other Roman (including Provincial ) 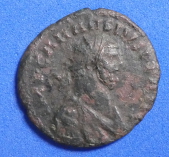 Reverse: Omphale, naked but for lion’s skin hanging from neck and shoulders, walking right and carrying club over shoulder; Greek legend for Maeonia either side

Obverse: Heads of Agrippa, to left, wearing combined rostal crown and laurel wreath and Augustus, to right, wearing laurel wreath, back to back; IMP above and DIVI F below, P-P across field

Note: Issued to commemorate Augustus’ victory in the battle of Actium in Egypt in 31 BC. Nime (modern Nemausus) has now taken this symbol as its emblem 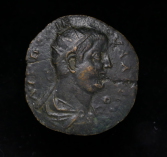 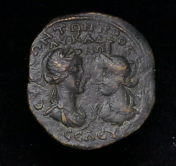 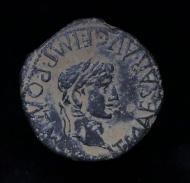 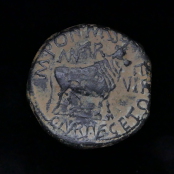 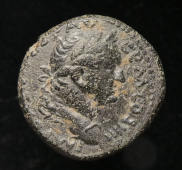 Only 14 specimens on RPC

This little, almost insignificant coin, has caused quite a stir in the last few years. Its correct identification has been argued by experts and enthusiasts alike and others like it have been designated variously at many an auction as Augustus, Caligula, Julius Caesar and Gaius Caesar, but I think its true identity has now been determined, mostly by a process of elimination!

Apart from causing an identity crisis in the numismatic world, it is what this coin represents that captures my imagination. Gaius Caesar, born 20BC, was adopted by Augustus in 17BC, along with his younger brother Lucius Caesar. Having no children of his own Augustus made them his heirs. Unfortunately for Lucius, he died in 2AD, fortunate for Gaius you might say, but not so; he died two years later at the age of 24 in Lycia from wounds sustained during a campaign.

This left Augustus with no heir again and lead him to adopt Gaiuse's other brother Agrippa Postumus and his step-son, Tiberius. Hovering in the background of all this deceit and intrigue was Livia. It is more than likely that she had a hand in Gaius' demise, she had already divorced her husband to marry Augustus to put her son in the right place at the right time. Agrippa Postumus was sent into exile on the island Planasia and in 14AD orders were given by either Tiberius or Livia (most likely Livia in Tiberius' name) for his execution shortly after the death of Augustus. This made Tiberius the sole heir and the rest is history as they say.

The portrait on the coin of Gauis makes it a rare and an early one, no wonder that it was confused with Augustus and Julius Caesar who's portraits are very similar. It could be a portrait of Augustus and the coin produced in the name of Gaius, but it is unlikely. More likely the other way round. He was made consul designatus and princeps iuventutis around 6BC and this coin may have been produced to honour him, but I am only postulating here. The legend of Gaius Caesar would indicate it is Gauis, or, if Augustus, for Gaius in the reign of Augustus. Julius Caesar was his Grandfather through adoption, so it very unlikely to be him and Caligula wasn't really in the picture until some years after.

A slightly better quality coin sold for $600 ten years ago. I am not asking that! The coin has a few scrapes on it but otherwise it's a lovely coin. To purchase this great piece of history use the PayPal link below:

The reverse of the Gaius coin.

The Vikings are Here!