The period between the outbreak of civil war between Caesar and Pompey at the beginning of the 49BC and Octavian becoming Augustus in 27BC, contains the 'Imperatorial' coinage.This was a transitional stage of coinage running alongside that produced by Rome and as yet only had the names of those in power and not their portraits. Julius Caesar was the first to make this innovative step, unfortunately he was assassinated only three months later, but the idea stuck and later issues all had the ruler's portraits on them and the Imperial coinage evolved. The Imperatorial coins of Pompey, Caesar, Octavian and Anthony etc will be added to this area for convenience, when available.


The Imperial Coinage of Rome covers over 500 years, from the establishment of Octavian (Augustus) to transformation and rise of Constantinople to Byzantinian coinage with Anastasius I. Those coins produced at provincial mints are separated, as are the Byzantine coins.

Struck under Caracalla, Diana with Torch

Reverse a little weak but the portrait is good.

A rare example as only two denominations were produced.

VF but a little ragged to edge 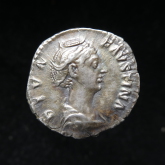 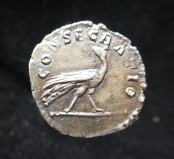 Rev: Peacock standing r., head l., on sceptre with knobs on both ends.

Obverse: Back to back heads of Augustus and Agrippa

Near VF pitting, but lovely reverse.